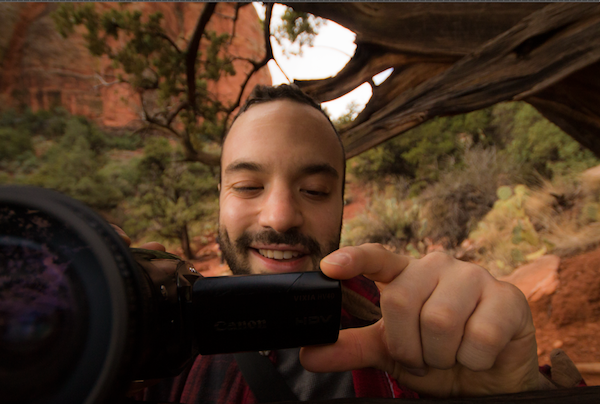 Jacob LaMendola was born without a sense of smell. In 2011 he made a documentary called ‘Anosmia’ in which he interviewed other people affected by this condition. We caught up with him ahead of SmellTaste2017 to ask him about making the documentary and his experience of life without olfaction.

Why are smell and taste important to you?

Both smell and taste are important to me in that they’re gifts of insight. However for better or worse, I’ve never smelled a thing, so for me anosmia is like an ongoing joke I share with the world – it’s a reminder that some things can never be explained.

When I was a kid, I could sense something was different about me. It wasn’t upsetting or embarrassing – it just took time to have the right words for the problem. People ask when I knew, and the truth is it was more a slow burn of mounting confusion. A boy at camp spraying cologne on my arm, someone passing gas in the cafeteria, my family cooking together… I spoke up when I was 11 and even then, it took a few years for my parents to believe. It took even longer to realize I wasn’t the only one.

Smell is important because it’s taught me that differences are sometimes invisible. When I reveal this part of myself, people are surprised, but more importantly, they’re intrigued. There’s great power in these moments because to be curious about one another leads to sharing honesty. The way someone describes a meaningful scent for example, says a lot about who they are.

A sense of smell is crucial to the way I live my life because it’s something I can’t do, and the things we don’t understand can nudge us to ask questions.

You have had anosmia from birth and made a documentary about anosmia which involved interviewing a number of people about their experiences of life without a sense of smell. How did making the document benefit you personally?

When I started making this documentary, I originally conceived it as a much bigger film. I wanted to interview doctors and scientists, and have medical footage of the nose and the brain. It was much more a scientific explanation of the condition, because I thought the film would be unclear otherwise.

As I started reaching out to potential interview subjects who had no sense of smell, I quickly discovered I was having the time of my life. A lot of people I spoke with had never met another person with anosmia. Sometimes it was like laughing with family late at night, and other times I was stunned by how stark the admissions became. I realized the emotional intimacy of these discussions was more important for me to capture then the full scope of the condition.

I decided to strip the documentary down to people who were affected by anosmia. This way I could focus on what was exciting to me – meeting people who wanted to share a part of themselves. In the end, I realized the documentary never really needed anything else. This project reinforced for me the power of a person telling their story. It’s a lesson I value immensely and continue to nurture in my films and in my relationships.

SmellTaste2017 is an opportunity for people affected by smell and taste disorders to come together, share experiences and learn from each other. From your experience of making the documentary, how important do you think it is for people to talk about their own experiences?

It took me until college to meet another person who couldn’t smell, and for a few years, we were the only two people on the planet who understood one another. When I decided to make this documentary however, my world opened up to interactions like this on a regular basis. The conversations were fantastic and with people of all ages and different backgrounds. I learned I was never really alone.

Originally I planned to be in the film, but in meeting everyone, I found it would be unnecessary. The interview subjects were able to communicate everything I felt without me having to say a word. It was more impactful to be silent, because anosmia wasn’t really about me anymore. So while there’s something incredibly therapeutic about coming together and talking, I would argue there’s just as much value in listening.

When I was a boy, I would have loved to know someone else who couldn’t smell, but it also would have been good to know that accepting yourself takes time. For those who are not yet comfortable in what makes them different, know you can gain a lot from just observing. I learned over and over in making this film that people offer a special part of themselves when they know you’re paying attention. If you’re not yet ready to venture into the unknown, a good way to test the waters is to listen to the world around you.

Drew Wilson has handled web design and communications for the UF Center for Smell and Taste since 2015. He is an alumnus of the University of Florida, where he earned a degree in journalism. In addition to his work for UFCST, Drew is a web designer for the Florida Museum and a reporter covering legislative campaigns and fundraising for SaintPetersBlog and FloridaPolitics.com. Before joining UFCST, Wilson covered the state economy and Legislature for LobbyTools.